Disco Never Sucked, Reality Did: A Preview of “Any Day Now”

The film is an edgier version of Harvey Fierstein’s “Torch Song Trilogy,” also set in the late 70s, where (in part) a gay male couple adopted a teenage boy. In “Any Day Now,” the teen’s not just any child, he’s a special needs kid with Down’s syndrome. Like in “Torch Song,” Rudy is a professional female impersonator. But unlike Arnold, Rudy is brassy, ballsy, and brilliant in an Italian streetwise manner. And he’s compassionate and firmly set in his beliefs of right and wrong. Which is how he ends up with Marco (Isaac Leyva), the neighbor’s boy left by his junkie mother.

The 1970s were cruel—glasses were gigantic, hair went forever, plaids and stripes worked together—and gays and handicapped people were equivalent. Wait, no, handicapped were just discarded; gays were reviled. The delicate interplay of injustice in this film will both make you cheer for the effervescent Rudy and his determination to have a relationship with his lawyer beau Paul (Garret Dillahunt) while saving a boy’s life — and make your skin crawl. And I don’t mean ‘skin crawl’ like in “Mad Men” where it is naughty cocktail drenched evil (toward women) that you know is (sort of) resolved in modern society, I mean the kind of icky film feeling that makes you realize we haven’t made much progress. The film is set in 1979, the year after Harvey Milk was murdered and is at the precipice of the 80s AIDs crisis, making it the perfect place to spin this truth.

Yeah, yeah, “Glee” and “Modern Family” are your favorite TV shows, you sobbed through “Brokeback Mountain,” and were endeared to “Kids Are Alright”—you’re totally down with the gays. Let’s say that’s a start. But if you say, “Well, none of this would happen today,” to Thee I say, “Yu-huh.” Go see “Any Day Now” and get a taste of where gays came from, where they are going, and what still needs doing for full rights. And on the Down’s front: there’s Becky on “Glee” who is together and likeable, and of course Chris Griffin’s star crossed girlfriend in “Family Guy,” so we aren’t complete cultural ogres these days, but we can’t hide behind Mitchel and Cameron and Becky and Ellen and say we’ve arrived.

It is a rare film where I don’t want to tell you what it’s about because I want you to go see it that badly. So go see it and find out. But I will say this:

If you are expecting “Pricilla” or even “Milk”— you will be disappointed. But if you are expecting a well done film that speaks directly to the issues of today through the lens of only three decades ago (okay, that’s longer ago than I thought it sounded at first, but you see what I mean. It’s recent compared to stone tool use, for instance). Because like Marco, even though we know we are in a gay tale and things have got to go badly at some point, we long for a happy ending.

“No one should be punished for stuff that ain’t their fault,” demands Rudy of Marco’s handicap, but we know he’s describing his life-way as well. Even though “Any Day Now” is a look back at where we were with these issues, we feel confident that with heroes like Rudy out there we will all sleep better at night. Just let him get his face on first. 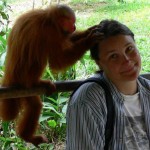