Traversing Life’s Challenges: A Review of A USEFUL LIFE 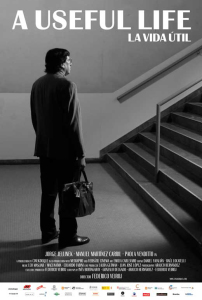 “A Useful Life” by Federico Vieroj is a 67 minute mini-feature that focuses on a major turning point in the life of Jorge, the curator of a small art house cinema in Montevideo, Uruguay. Vieroj’s movie is about the fate of film in a digital world and an adoring ode to the days before the advent of video when movie watching was a collective experience. Most importantly however, his film is a brilliantly lyrical example of how motion pictures can prepare us for the big changes in our lives.

Jorge’s life has been dedicated to bringing the best films from around the world to his fellow Montevideans. Evidently most of them must have either switched to home video, or moved on to other interests. Jorge hosts a weekly radio program dedicated to a deeper appreciation of cinema, but it fails to increase the theater’s patronage. Meanwhile, the projectors grow more rickety by the day, as do the theater seats, film archives and balance sheet.

This does not discourage Jorge who seems happy to go on eating his sack lunches while acting as programmer, projectionist, promoter, curator, business manager, janitor—in other words, a single cog on which all essential tasks must turn. Other than a feeble attempt to date a member of his audience, it appears that life at this little movie house is the sum and total of Jorge’s existence.

After Jorge submits a report requesting funds for repairs from the philanthropic organization on which the theater has grown dependent, the group’s representative informs him that, due to the theater’s hopeless insolvency, support will be withdrawn altogether.

Their lifeline is cut and the doors of the cinematheque are closed. The remainder of this story unwinds as Jorge spends his first day floating free from responsibilities that have occupied him for 25 years.

Early on in “A Useful Life” there is a shot of Jorge pacing the floor as he waits for the female patron, with whom he wishes to become better acquainted, to emerge from the theater door. Just above Jorge’s head stretches a series of photos, depicting a horse and rider in full sprint. They were captured in 1878 using 24 cameras rigged with trip wires at a racetrack in Palo Alto, California by the photographer Edward Muybridge.

Those images represent a major breakthrough in the birth of motion pictures, just as their appearance in this story foreshadows the breakthrough, which Jorge is about to undergo. It also attributes the grace and fluidity that mark his swift adjustment to a lifelong involvement with motion pictures.

The horse motif is echoed in a hauntingly poetic song that accompanies a montage at the beginning of Jorge’s transformation. From this point on, photographs appear in various places Jorge visits on his way to indicate his progress toward a final epiphany. The filmmaker invites us to consider how such immersion in the vivid storytelling of cinema can become a trustworthy steed for navigating life’s challenges.

Motion pictures contain endless examples of characters coming to terms with difficulties in their lives. In this way they prepare us for unexpected turning points in our own.

In the closing scene, when Jorge is seen traversing the ups and downs of his environment with joy and grace, it is deliberately staged in order to call to mind a strip of film moving through the sprocket of a projector. Jorge embodies it as a metaphor so that his life becomes the ultimate movie.