Are You Gonna Be All Right? A Review of The Three Burials of Melquiades Estrada 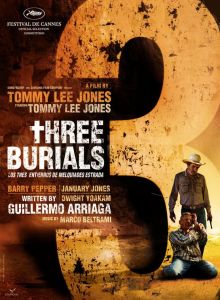 “Are you gonna be all right?”

It’s the last thing we hear in The Three Burials of Melquiades Estrada.

And it’s the first thing we think about as the story progresses. Will we be all right once we go on this journey?

The journey, not to give away too much for those who have not seen this multi-award winning 2005 film, is to make good on a promise made to a friend.

Pete Perkins (Tommy Lee Jones), a weathered ranch foreman living in the borderlands of Texas, has a good friend in Melquiades Estrada (Julio Cedillo), a Mexican “illegal” who works as a cowboy on the ranch.

The intertwining, non-linear unfolding of this tale increases our interest, especially with the help of a really fun cast, including Barry Pepper, January Jones, and Dwight Yokam.

Even without all of that, once we discover the promise – to return a (dead) friend to his home country – we immediately sign up.

You totally have said to your besty, your sib, your mate, “I would hide the dead body for you.” In the same vein, if this person asked you to insure their last wishes were fulfilled — you’d do it.

Okay, maybe you wouldn’t drag the guy responsible for your buddy’s death on a long, treacherous, grueling horseback ride to Mexico, illegally following a reverse path that Coyotes take when smuggling immigrants to the US. You might drive or put your dead pal on a plane in cargo.

But that is not this story.

This story forces us to test our personal loyalties. It makes you ask if you would go to any length to fulfill a promise. And when the pay-off is not what you expect, it forces you to ask if you are all right. You probably won’t be.

Tommy Lee Jones is no stranger to borderland tales. In the opening moments of MEN IN BLACK, he’s apprehending an illegal alien of the otherworldly sort. And shortly after he co-produced this film, he was back on the US/Mexico line with NO COUNTRY FOR OLD MEN.

He’s smitten with this region, and in the case of The Three Burials of Melquiades Estrada, thankfully so.

I promise, the journey will be worth it.