At the bottom of THE DEEP BLUE SEA: A Review 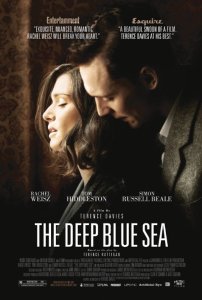 At the risk of making light of isolation and depression, the audience of director Terence Davies’ “A Deep Blue Sea” may need a pocket guide and a second viewing to gain perspective on the film.  A portfolio of symbolism to look for, themes to explore and questions to ask along the way could make for a more satisfying experience.

In Davies’ multi-layered story, the underlying themes of listening to our inner voice, listening to each other, seeing ourselves as we are versus how others see us are so much in the background, some might say they are even lost amongst the asynchronous flashbacks.

The story bookends with Hester at her dark-draped window: in the opening scene she closes the drapes and brings you inside to her isolated, despondent life of unfulfillment.
Hester plunks a few shillings into the gas meter, lies on the floor and watches her reflection in a mirror.  Repeated use of mirrors throughout the film beg the questions: What is she looking for?  Does she see herself as others see her?  Is she listening to that “still small voice” of guidance inside us all?

The overall point of the opening scene raises the central question: will Lady Hester Collyer, played teriffically by Rachel Weisz survive?  Does  she have the strength to look inside herself and find a reason to live?

Flashbacks reveal that Hester has left her husband, the eminent Judge Sir William Collyer and fallen in lust with former RAF pilot Freddie Page.  Consider that Hester already feels isolated living with her much older husband who is more a father than a lover.  Does Sir William’s occupational title also suggest he sits in moral judgment?  It’s not important that the plot involves a titled British couple.  Think about the average person who lives in quiet despair of ever finding meaning in their life.

The surface plot would have us believe that the core problem is that discontented Hester has found sexual pleasure for the first time in Freddie.  Look beyond the text and images and ask yourself: what would you do if you felt trapped in your life and wanted more?

When Hester makes the decision to leave William and unsympathetically clings to Freddie, there seems to be more to the story than living with the consequences of infidelity.  Is it possible Freddie is married also?  Why else leave Hester in such isolation?  Is Freddie selfish or did he just get bored?

In a critical scene after Hester has left Sir William, they speak to each other with an apparent mutual fondness.  The absence of a musical underscore asks us to pay attention to what they’re saying.  They’re a separated couple.  Do they listen to each other?  Have they ever listened?

The film makes remarkable use of period songs, most conspicuously in a pub sing-along and underground morale-raising melody: the only time Hester seems to feel a part of things and sings along.

With outstanding cinematography and extraordinary production design, “The Deep Blue Sea” flits between present and past. It remains to be seen if Hester’s character connects with 21st century audiences. Davie’s powerfully minimalist style suggests a Hemingway novel brought to life.

As the “Deep Blue Sea” began, it also ends with Hester in her lover’s apartment: Freddie leaves her, she cries, and forced to make a decision, she opens the drapes.

Armed with a few questions, watch the film: As Terence Davies makes his point about suffocating loneliness, you’ll have your own questions, then watch it again.