Breaking thru Guatemalan Injustice: A Review of CAPSULAS 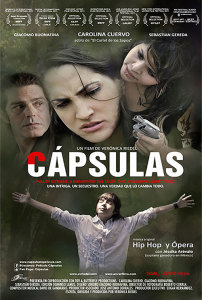 When asked in an email interview if she came under pressure from drug traffickers during the film’s production, Riedel responded, “I am a little nervous of showing it in my country because I do say that drug dealers can be anybody. People are killed every day for vengeance reasons. It would be crazy for them to do something to me, but since these people are super crazy, I don’t know what can happen. I have taken precautions in case.”

In her directorial debut, Riedel, one of Guatemala’s first female directors, courageously reveals social injustice through the eyes of 12-year old Fonsi.

On the surface, Fonsi lives a privileged life. However, his home environment becomes difficult when his U.S. bound stepfather forces Fonsi to swallow heroin capsules and his mother refuses to let him look for his biological father.

Rebelling against his mother, Fonsi looks for a way to escape his deteriorating, increasingly cruel home life and leads his friends in making fake violent videos as a way to raise money in the search for his biological father.  Guatemala’s social conflict is reflected in Fonsi’s life when the maid’s pot smoking, drug-dealing kids threaten Fonsi and show up uninvited at his school, start a fight and leave a teacher unconscious on the ground.

Director Riedel’s dream of producing “Capsulas” was many years in the making. She faced enormous challenges in financing her film and for 15 years raised money through her sales as an artist and photographer. “I was financed through people that know my art work and have faith in all the projects I do,” she wrote.

Respect for a new and female director from the crew of 43, did not come easily. “Hiring the crew was interesting because I think they wanted to test me all the time. But I did my homework as a producer and as a director. I was prepared all the time. I made decisions, included everyone in taking them, but I was firm getting the best outcome. By the end of the first shooting day, everyone new I was in charge.”

Riedel grew up in a violent environment—Guatemala emerged from a 36-year civil war in 1996—yet her spirit remains, and she loves storytelling.  She purposely chose a feature film format over documentary style because  a narrative, entertainment-style drama with music, in her words, “captures the brain and the heart faster.”

In the emerging Guatemalan film community, Riedel is leading the way for new technology, having shot “Capsulas” on an HD Red One Camera. The film’s score features original hip-hop and opera music sung by soprano Jéssika Arévalo.

When asked what she wants her audiences to come away with from “Capsulas,” Riedel, a mother of three, replied that she wants “parents to do something to change things. If I change one heart, that’s what I needed for my life to do.”

In Spanish with English subtitles.

CAPSULAS will be showing at the Santa Fe Film Festival Friday, October 21 at 4p.m. at CCA. Click here to view more info on the film.