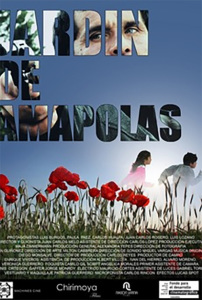 Most people in the US think of a “garden of poppies” (JARDIN DE AMAPOLAS), and immediately think of WIZARD OF OZ. Or at least I do.

Frolicking, familiar characters drifting to sleep in the pretty flower fields until Glenda sprinkles helpful snow over them, ensuring the continuing caper.

SMASH TO: JARDIN DE AMAPOLAS. Yes, there are fields of pretty poppies. Yes, there is a scene where “white snow” drifts down on them.

But the snow is fumigation poison. And the fields are full of men with AK-47s.

This Warsaw Film Festival nominated 1-2 Award film is about two kids and their slice of life. Of course their slice is set in a backdrop of heroin cartels, paramilitaries, and guerrillas in the Colombian countryside.

Emilio (Carlos Hualpa) and his 9-year old son Simon (Luis Burgos) become exiled by guerrillas from their potato farm and seek refuge with their cousin Wilson (Juan Carlos Rosero). Against his better judgment, Emilio agrees to work with his cousin for the poppy cartel, while Simon befriends the next-door girl, Luisa (Paula Paez).

The real story is Simon’s affection for a girl his age, Luisa’s obsession with a neighbor’s dog, and their lives interwoven in the complex tapestry that makes up this dangerous civil war world.

It’s similar to ZOMBIELAND where all that stuff happens, but it’s really a romantic comedy.

According to director Juan Carlos Melo Guevara: “The idea was not only make a portrayal unique to the film history of Colombia, but to make a story through the point of view of two kids who can only see their reality with innocence, without speeches or academic criticism; that’s why this is not a film about war, on the contrary, the war is only a stage where life, dreams, and hopes can continue”.

Although set in 1990’s when some of the heaviest clashes took place, it could easily be happening now since the skirmishes continue to this day.

The Colombian government, or lack of for decades, and the business of drugs is complex at the highest levels. When it trickles down to a single family’s life, like in JARDIN DE AMAPOLAS, we feel along with Emilio, Simon and Luisa the confusion of being forced to live this way.

I was fascinated by the business of poppy growing. I work in South America, mostly in Ecuador. Whenever we are near the southern border of Colombia we are told to be very watchful for guerillas and drug smugglers.

I always assumed it was the coca business that was most dangerous, but after speaking with Colombian colleagues and students (who are not particularly forthcoming about such things as it is an embarrassment to those in academia), the coca business is actually well managed these days.

But poppies are another story.

Sure, the filmmakers have a clear message about civil war in Colombia. But that’s not what will grip you in this film. What will make you think about JARDIN DE AMAPOLAS after you leave the theater is not the business of poppies or civil war.

You won’t stop thinking about bad decisions (or rather the best of bad ones), what a family must do for each other (or against each other) in a time of crisis — and the simplicity of childhood friendship in an impossible world,

And in the background somewhere tickling the corners of your brain – you will be consumed with understanding the price for US drug addiction.

JARDIN DE AMAPOLAS is a rich, well-executed, honest film from a country we rarely hear from.