Sometimes the Training Wheels Just Come Off: A Review of THE CLUB 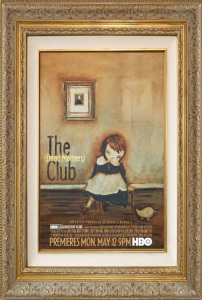 Full disclosure. This film is subtitled THE [Dead Mothers] CLUB.

Right away you’re thinking, “Why on Earth would I intentionally see a depressing documentary about women who had their mothers die before they were 20?”

I get it. I do. But this is a film that will change you. I don’t care who you are: Man, woman, pig, parakeet – you will change for the better for seeing this film.

I think reviewers might say this too often to get one more butt in the theater. I seriously did NOT want to watch this film. It wasn’t my first choice to review. And now, I couldn’t be more grateful for the experience.

There are a lot of familiar faces in this film that lost their mothers when they were young (Jane Fonda, Rosie O’Donnell, Molly Shannon). We hear from them interspersed with the lives of three “real” women (not that our actress friends aren’t real. They’re just…you know what I mean).

I have friends who lost their mother’s when they were young. They have experienced very similar kinds of “mother withdrawal” to the women in THE CLUB that I never fully understood. Sure, I had some early childhood loss of family members (other kinds of Death Clubs), just not my mom.

Growing up, I would have traded with one of these women because my mom and I had a difficult relationship. Then I grew up and mom got older and needed my help. All of a sudden I had a mother I loved. It only took most of my life to get there.

These are not easy stories to hear: Illness, suicide, and tragic, sudden death. The experiences of these women are touching, heartbreaking, and empowering.

Clearly, if you are a woman who lost a mother when you were young, you will resonate seamlessly with the stories presented. You will likely feel great catharsis and support from it.

Maybe in watching this documentary, you can appreciate your mom faster than it took me to appreciate mine.

When you leave the theater, you will be grateful you are not part of THE CLUB.

One thing is certain. You will have a call to make.