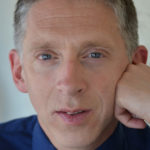 In addition to his position at SFFF, Aaron Leventman is also the curator for the virtual UnLonely Film Festival responsible for research and selection of content for the Festival’s programming.  He brings with him 20 years of experience as a programmer for film festivals, including AFMX, The Santa Fe Film Festival, the Bioneers Moving Image Festival, and an online LGBTQ+ short play series through his theatre company Almost Adults Productions.  He is also a published and produced playwright, an actor in film, TV, and theatre, and instructor of creative writing, acting, and film appreciation.