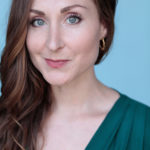 REBEKAH WIGGINS is a passionate award-­winning actor, writer, director and a certified Chubbuck Acting Technique teacher who specializes in telling female centric stories showcasing various ethnic, religious, and sexual orientations in her work. With over a decade of experience as an actor and a producer, adding directing to her repertoire came naturally.

Wiggins has won Best Actress awards four times at various film festivals including the Palm Springs International Film Festival. Rebekah wrote/produced/acted/directed in the recent short film Today, which premiered at the 2017 LA Femme International Film Festival and she was nominated as runner up for Best Actress at the 2018 Albuquerque Film and Media Experience. Rebekah has been in the major motion pictures Brothers, Let Me In, Fright Night, Sunshine Cleaning, Frontera, Dark Around the Stars, and The Rambler. Wiggins co-­produced and
starred in the psychological thriller, Those Who Wait alongside writer director Hannah Macpherson (@Tagged). You can watch Rebekah’s work as series regular, Gladys in WGN America’s Manhattan and as Mrs. Reynard opposite Alexander Skarsgard and Michael Pena
in War On Everyone. Rebekah co-­produced and starred in the dark experimental thriller feature film, IRIS slated to hit festivals 2019.

During screenwriting classes with Ashley Serrao, Rebekah began developing her award winning short film, Today. She quickly found her voice as a writer and a year later started collaborating with Ashley. Through their shared vision and inspiration, they began writing a pilot episode for their lesbian gothic western television series, Savage Lot. The pilot episode was a 2018 Finalist for the Creative World Awards & Quarter-­Finalist for the 2018 Austin Film Festival.

Rebekah is a Certified Chubbuck Acting Technique Teacher who has been teaching in LA, NM, and CO for three years. Teaching revealed her gift for directing and passion for working with actors in the medium. Through her acting work, teaching, writing and directing her focus is
always connecting people and communicating the human condition. Watch for Wiggins’ upcoming work in the fall of 2019 as director of the female driven gothic western feature, The Great Divide.