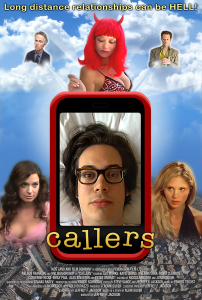 The dramatic question which motivates “Callers” is this: How does a slovenly, down on his luck guy deal with the sudden and unexpected death of his girlfriend? There are several different avenues that a filmmaker can go down to give an audience the answer. The key element to consider is that “Callers” is a comedy, and the jokes need to be delivered with the pain.

That leads us to the introduction of a “ghostly” cell phone. After Amanda’s (Melissa Ordway) untimely death, Will (Nelson Franklin) begins receiving phone calls from the afterlife. Amanda is only the beginning, as Will eventually gets calls from a menagerie of lost souls. The plot complications that this particular problem leads to will not be revealed in this review.

What can I safely tell you without ruining the movie?

Beneath the slapdash comic surface of “Callers”, there are serious issues being raised. The central one is how we handle grief. Will’s journey through the seven stages is brought into sharp focus by the appearance of his father Hamilton (David Clennon.) The emotional blockage that Will experiences has clearly been learned by watching his Dad’s example.

What else is it about? The nature of family; Will’s history with his parents becomes a major part of the film’s second act. That shift is risky movie for a romantic relationship based comedy, but it’s nicely executed.

My chief admiration for “Callers” has to do with the talents of the movie’s lead. Nelson Franklin (Will) carries the entire film by convincingly playing an average guy. That’s a much a harder task than it sounds like. There is nothing showy about his performance, just engaging and honest.

“Callers” is worth going to see for a few laughs. The pleasant surprise is that the laughter is not empty, and your time isn’t wasted.