Who Are You Fighting For? A Review of BATTLEFIELD HEROES 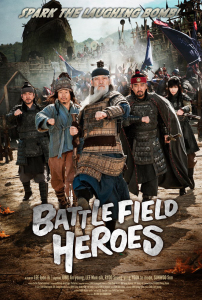 You’ve heard that “Battlefield Heroes” is like a Korean Monty Python film about the escapades of war in the 7th century with slapstick comedy, sight gags and silly kings. After seeing it screened at the Santa Fe Film Festival tonight, I would agree with that analogy with a few caveats: this film has better production values, a tight and even moving script, and some fine acting.

In the beginning, keeping the cast of characters straight is a daunting task. But the first third of the movie is where the most humor is, including a Trojan rice pot, catapulted farm animals, and a drawn out farting scene that, of course, ends with everyone in the muck.

Emerging as the reluctant hero, is a conscripted farmer called “Thingy” who acts as Everyman, doing his best to escape the fighting in order to get back home to his mother. Instead of following his own rule of not standing out in a crowd, he ends up being a pawn in the warring sides of this battle.

The plot is endlessly spinning from the moment the lines are drawn on what looks like a large replica of the board game, Risk: The besieged castle in Goguryeo with its infighting among royal brothers; the attacking army of Silla; and the powerful Chinese Tang (with their own captioned dialogue.)

Once you’ve got the major players defined, they start changing sides. A brother is jettisoned from the castle only to become an ally with the Tang. Thingy is captured and used to dishearten the Silla by reminding them they are fighting a rich man’s war (and by crying for his mommy.) The handsome younger brother with flowing hair and cape to match, is asked to turn traitor against the oldest brother by the second oldest. And a young woman warrior is married against her will to a peasant whom she begins to warm to.

In fact, confusion about who you’re fighting and why is the theme of this movie, and that’s what makes it more than a comedy. At one point, a king who comes into the battle only after one side has been clearly defeated says, “What are we doing in the middle of this war? This is embarrassing.”

South Korean director, Jun-ik Lee doesn’t miss a beat showing us the absurdities of war, and created this film as a response to the North Korea/South Korea conflict with major players (China, the US) in the wings making the moves. Lee is quoted as saying, “This movie was inspired by the political situation in Korea in 1995, when there were a lot of regional conflicts among different prefectures in Korea.”

But like any good flick, the story has grown beyond the original reasons for creating it, and become more than an allegory. As author Robert McKee says, “Storytelling is the most powerful way to put ideas into the world today.”

– US Premiere of “Monsieur Lazhar“, Canada’s official submission to the 84th Academy Awards for Best Foreign Language Film screens Sunday, October 23 at 6:45p.m. at the Screen

For tickets call the Lensic at 505-231-8775 or purchase online at ticketssantafe.org.