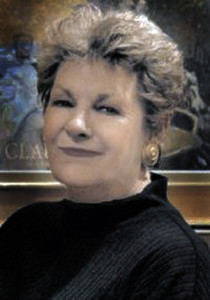 Sheri Mann’s background and experience in the entertainment industry truly informs her ability to gently and safely interview those wishing to leave a living legacy of their most memorable moments on DVD.  She is sensitive to and honors clients’ reticence while creating a comfortable space in which clients may freely share whatever they wish.This ability to put people at ease in any situation is as natural to her as breathing.

Sheri completed her MFA in Theatre with English and Music as secondary degrees at the University of Southern California. She then pursued graduate studies in languages at the Sorbonne in Paris. Working as an actress, she studied with well-known acting teachers Sandy Meisner, Stella Adler, Uta Hagen, and film director Daniel Mann.

Sheri began her acting and singing career in a repertory company on the London stage and with the Edinburgh Festival of the Arts in Scotland. She performed in over 40 repertory company plays and musicals, costarring with actor John Ritter. She then went on to act and sing in European films and in television for the BBC and London Weekend Television. Hollywood roles followed her acting studies, which led to numerous performances in theater, cable TV, film, and network TV for many years in California and abroad.

Assisting her second husband, film director Daniel Mann, Sheri worked as a dialogue coach. She was eventually asked to start a coaching studio called the Actor’s Place in Hollywood where she trained actors and coached them for auditions. She has conducted many popular seminars and classes at colleges and universities.

Being so immersed in film, she subsequently became attracted to how the writing process generates films and became a literary agent in Hollywood, representing directors, producers, and writers. Her major skills were common sense and fair play while supporting the creative process.

Upon moving to Santa Fe after Daniel Mann’s death in 1992, her interests led her to advertising, public relations, and marketing work for a local, food and wine-focused newspaper. This work brought her in touch with all the chefs, restaurateurs, and hospitality staff in Santa Fe and beyond. Chefs were becoming celebrities, and many of these people had a need to refine their ability to interact with the public. So they enlisted Sheri as a Communication Skills Coach. She developed chef’s workshops in Santa Fe and in other parts of the country. Her coaching has helped college presidents, litigators, authors, doctors, and other presenters. Also throughout her years in Santa Fe, she has continued to teach acting and camera auditioning technique.