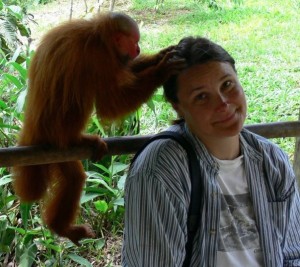 Dr. Laura K. Marsh has worked all over the world in tropical rainforests studying everything from plants to monkeys to jaguars to people. She taught climate change education on behalf of the Department of Energy and Los Alamos National Lab in the Arctic (North Slope of Alaska), Papua New Guinea, the Republic of Nauru, Australia, and the US.  She has worked and traveled in 30 countries.  Dr. Marsh has published in professional journals on many aspects of science, conservation, and education, including two edited books called Primates in Fragments. The second volume was listed as Springer’s top 25% of science downloads (over 6100) for 2014, making it a book reviewers consider “essential.”  Dr. Marsh’s recent monograph revising the taxonomy of the saki monkeys in a special edition of Neotropical Primates is the largest revision for any Neotropical primate genus in more than half a century.  She described 16 total species, 5 of them new to science. She is currently mounting an expedition into the Alto Rio Jurua watershed in Amazonian Brazil to look for a saki monkey that has not been seen alive since the 1930s. BBC is considering the project for a documentary.

In addition to her science work, Dr. Marsh is an award-winning screenwriter (including Nicholls), and is a member of the Western Sandblast consortium in Los Angeles. She is also the Hollywood Ecologist, answering science questions for film professionals and writers. All of her websites are gathered into a newly forming blogspot called Higher Cannibalism [highercannibalism.com].