Poetry for the Ages: A Film Preview of “Shun Li and the Poet”

On the film festival circuit, there sometimes comes along a film that is so unassuming, yet sweetly emotional that it gets lost among the more notable films. “Shun Li and the Poet,” from Director Andrea Segre is one of those films that will stay in your heart and mind long after you leave the theatre.

Shun Li (Zhao Tao), a young Chinese mother of an eight-year old son leaves her simple life in a Rome sewing factory to work in Chioggia, a small fishing village outside Venice. Shun Li doesn’t have much choice in leaving and must still repay those who sent her there. They don’t tell her how much she owes, just that they will tell her “the news.”

Little more than an indentured servant, Shun Li leaves her son behind and labors as a bartender of sorts in Osteria, a small taverna in order to pay her Chinese mafia-type bosses for her debt. Just what type of debt does Shun Li owe? The obvious one of travel? Or a metaphorical debt, one larger than herself? The cinematography emphasizes how small Shun Li is in the world, but she retains an optimistic spirit and tells her son stories in letter form: she must be reunited with him. She works for him, not the sewing factory boss, not her Chinese bosses and not the taverna customers. 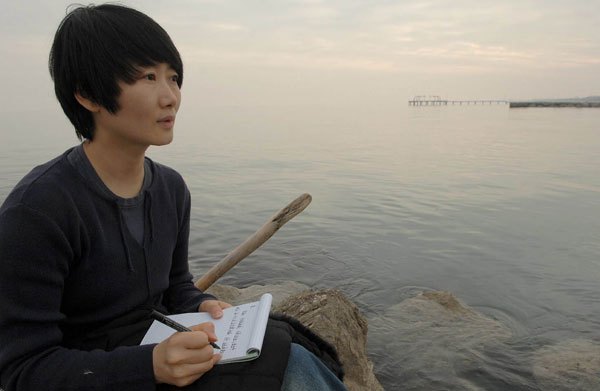 Chinese men’s disrespect for women in general and Shun Li in particular manifests itself in their ridicule of Shun Li and China’s great poet, Qu Yuan. However, it’s Li’s love of poetry that draws the attention of Bepi (Rade Sherbedgia). Bepi, a poetry lover, is gentle with Li’s Italian-speaking skills. He shows her pictures so she’ll know how to mix his drink, coffee laced with prune.

Through shared photographs of fishing boats and Shun Li’s son, Li and Bepi find the most important things they have in common are poetry, fishing and a need for family. Retired from fishing, Bepi longs for a purpose and is at odds with his son. Li longs to pay her debt and reunite with her son.

As the May-December friendship grows, the Chioggia citizens grow jealous of it. Ignorance, lies and total speculation ignite an Italian-Chinese culture clash. Shun Li’s bosses force her to make a decision. Will she chose Bepi and true friendship? Or choose her son’s return? At such a critical decision point, Shun Li turns to poetry for answers and recites:

“Can a square be made a circle?
Can different roads come together?
Acute is the remorse for the lost way
In the faltering steps of my return.
Reluctant, my cart turns back.
Muddled among the errors was the way.”

“Shun Li and the Poet” will screen at 6:00 p.m on Friday, December 7 at The Screen on the campus of the Santa Fe University of Art and Design.