Public events, especially film festivals are in the balance around the globe as the latest COVID variant makes it way out of holiday gatherings creating more concern about whether or not to have in-person gatherings.

The Santa Fe Film Festival is not immune to this as their 2021 edition went online much to the disappointment of the filmmakers hoping to come to New Mexico for this iconic festival.

This year, the Festival has been working on having in-person events while keeping attendees safe. Part of this planning included making the decision to require proof of vaccination plus the requirement of masks, social distancing, and frequent washing hands. To help the festival stay safe, their COVID compliance partner, VIP StarNetwork, the premiere vendor for film and Television compliance will be helping support these efforts by being on-site with PPE, rapid testing, and more.

“This decision, to have in-person activities, was not taken lightly, it was the top weekly discussion we had with our team,” said Stephanie Piche, Executive Director of the Santa Fe Film Festival, “We have been working closely with our venues and will be following our State guidelines to offer limited in-person tickets to our events in addition to our safety protocols.”

This year, the Santa Fe Film Festival had over 500 feature, documentary, and shorts entries from 36 countries which made judging challenging as there were so many amazing entries submitted, many of which have had to withdraw due to getting distribution.

The Festival will have the films in contention available online from February 3rd to the 20th, giving film fans an added week to watch the entries online with their streaming partner, XERB. In addition, in-person screenings where the directors will be at the Festival are scheduled for the weekends with Q&As, Panels, Workshops, Red Carpet Interviews, and Mini-Awards ceremonies happening both weekends.

New for this year – Audience Choice Awards which will be announced after the festival so that the audience has a chance to screen the films.

Second weekend: We have award-winning America Young, actor/director, philanthropist is getting the Spirit of New Mexico Award (Roswell, NM, Stunt Coordinator for Warner Bros and Universal Studios), Chris Gero a 12-time Emmy Award winner and Grammy Award-nominated record producer, well-known for his visionary style in the music industry. An accomplished composer and director, “The Sound of Us” is Gero’s second documentary feature film. Gero is also the founder of Yamaha Entertainment Group and Chief Artist Relations Executive for Yamaha Artist Relations Group, Gero oversees the management and branding of Yamaha’s global roster, having signed more than 5,000 artists to date. Also known for his large-scale concert productions, Gero has produced live concert events for some of the biggest names in the music industry, including Ray Charles, Stevie Wonder, Elton John, Tony Bennett, Michael McDonald, Norah Jones, Sheryl Crow, and John Legend.

In addition to the screenings at the Festival, the team has been working on workshops to help attendees in the film and television industry and those hoping to learn more for their future careers.

For the complete list of films, synopses, and other special events happening during the SFFF 2022, please visit http://santafefilmfestival.com after January 15th for the most updated information. For event tickets, please visit https://bit.ly/2022SFFFTicketing. To get tickets for the day of events, you can purchase them at the venue. For further information or press inquiries about the Santa Fe Film Festival, please contact Stephanie Piche, director@santafefilmfestival.com. 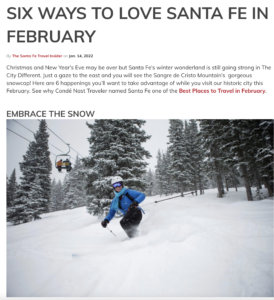