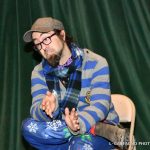 Stephen Jules Rubin is honored to be included on the board of the Santa Fe Film Fest as he first got involved with the SFFF in its early years and served in various capacities over some six years as the SFFF approached its first decade of existence.  After a hiatus as the SFFF evolved, he is proud to have been asked to return.

Having played in Santa Fe in many capacities over roughly 20 years, he’s dabbled as a filmmaker, theater performer and more with various troupes and theaters and with Julesworks. Amongst their many endevours, JW has made films and most recently produces Santa Fe’s longest running not quite monthly live variety show.

Working with SFFF Founder Jon Bowman, Rubin served as Deputy Director, Programmer and more.  More recently, when George Martin re opened SF’s beloved Jean Cocteau Cinema, his first hire as manager was Bowman, who included Jules amongst the first staff. He remains one of the few part time employees to have been involved for all of GRRM’s JCC’s nearly 6 years.

SJR stumbled into becoming a radio personality a few years back (as he has the perfect face for radio), with Madrid’s community radio station 96.9 FM KMRD. He gets to do a show every Monday 1 to 4pm.

Also working as a server at Jambo Café, while hoping to perform and share his passions as much as possible, Jules is pleased to add SFFF Board Member to the roles he gets to play.