Maybe Logic: The Lives and Ideas of Robert Anton Wilson

Guerrilla ontologist. Psychedelic magician. Outer head of the Illuminati. Quantum psychologist. Sit-down comic/philosopher. Discordian Pope. Whatever the label and rank, Robert Anton Wilson is undeniably one of the foundations of 21th Century Western counterculture. Maybe Logic – The Lives and Ideas of Robert Anton Wilson is a cinematic alchemy that conjures it all together in a hilarious and mind-bending journey guaranteed to increase your brain size 2 – 3 inches! From the water coolers and staff meetings of Playboy and the earth-shattering transmission of the Illuminatus! Trilogy, to fire-breathing senior citizen and Taoist sage, Robert Anton Wilson is a man who has passed through the trials of chapel perilous and found himself on wondrous ground where nothing is for certain, even the treasured companionship of a six-foot-tall white rabbit. Featuring RAW video spanning 25 years and the best of over 100 hours of footage thoroughly tweaked, transmuted and regenerated, Maybe Logic follows a reality labyrinth which leads through the hollows of human perception to the vast star fields of Sirius where we find one man alone, joyfully accepting his status as Damned Old Crank and Cosmic Schmuck. Beaming with insight, frustration, compassion, and unshakable optimism, the ever-open eye of Robert Anton Wilson penetrates human illusions exposing the mathematical probabilities and spooky synchronicities of the 8 dimensions of his Universe. 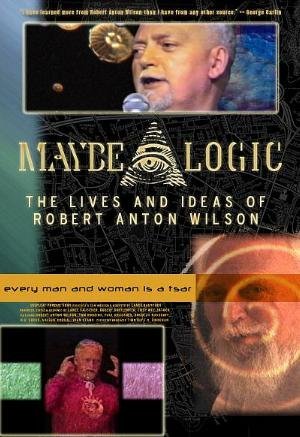