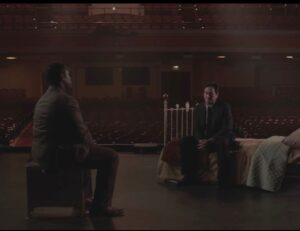 In 1940, controversial author Richard Wright turns to Pulitzer Prize winning playwright Paul Green to help adapt his best selling book, Native Son, into a Broadway play. A friendship between the two develops – they debate and collaborate for several weeks over the summer in Chapel Hill, North Carolina, laboring night and day through extreme heat to adapt the story of Bigger Thomas, a young black man who accidentally but brutally kills a white woman in her bedroom. Now it is March, 1941, and they are in New York at the St. James Theatre on the eve of opening night, and a difference of opinion over a single page of the script threatens an impasse. As rehearsal continues around them, led by the mercurial Orson Welles, the resulting argument – delving into race, class, politics, and personal story – seems destined to dissolve their friendship.