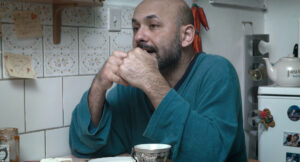 Feelings change quickly. Love becomes loss only to become love again. Ionuț and Călin have recently broken up. When they accidentally meet again, their feelings resurface, along with the tensions that drove them apart. Two men coming from different worlds, a relationship that takes them beyond their own limits.

In 2007 Sorin graduated from the National University of Theatre and Cinematography in Bucharest, where he studied Acting. In 2010 he co-wrote with Vera Ion an autobiographical theatre play: “Ich Clown” the story of a young Romanian actor immigrating to Germany to work as a street artist. In 2010, alongside writer Vera Ion, he founded and started teaching in the “Write Yourself” workshop in Bucharest where participants write scripts documenting their personal stories. Here, Sorin started to direct short films, following stories developed in the workshop. In 2015, “A girl I went to school with” won the Villa Kult Residency Award at the Next IFF in Bucharest. In August 2016 Sorin is selected for the Sarajevo Talent Campus. In 2018 “Ionuț and Călin” is selected in the National Competition at the Transilvania IFF in Cluj and Next IFF in Bucharest where it receives the Award for Best Romanian Short Film. In 2019 Ionut and Calin was selected to be screened at the Cannes Court Metrage and received an Official Selection from the PÖFF Shorts Black Nights Film Festival in Tallinn and the Pride Pictures Film Festival in Karlsruhe. It was also selected in competition at the Este Film Festival 2019 in Sibiu and the Gay Film Nights Film Festival in Cluj.

The stories that interest me are personal stories I come across in my workshop in Romania, intimate stories that document reality. I am fascinated with the dynamics of our relationships: how we listen to each other, the attention we give one another, the different layers of behavior and emotions that make up our human character.
Ionut and Calin is an award-winning independent short film and one of the very few in Romanian cinematography dealing with the subject of a gay couple.

The director, Sorin Poamă, is a Talents Sarajevo alumni of 2016 and has previously won the Villa Kult Award at the Next International Film Festival, in 2015, with his first short film A girl I went to school with. The editor of the film, Letiția Ștefănescu is also a Talents Sarajevo alumnus, of 2018 and a Berlinale Talents alumnus of 2010.

Ionut and Calin was written documenting a personal story of one of the actors, in the Write Yourself Script School in Bucharest, a creative community that has been developing autobiographical scripts for 9 years. The film Ionut and Calin was produced on the team’s own money, with hundreds of hours of volunteering and a lot of enthusiasm. The film’s post-production was paid through an Indiegogo campaign and funding awarded by Film +.

The movie’s idea caught shape during an exercise in the SDT. SDT’s specific work strategy led to more than a year of training for the two main actors who spent hundreds of hours of improvisation or re-enactment of real-life situations, told by the author-actor, with the director and the rest of the team.