Joe Buffalo is an Indigenous skateboard legend. He’s also a survivor of Canada’s notorious Indian Residential School system. Following a traumatic childhood and decades of addiction, Joe must face his inner demons to realize his dream of turning pro.

Syrian-Canadian filmmaker Amar Chebib began making videos while growing up skateboarding in the Middle East. With sensitivity and style, his work pushes the boundaries between genres and is rooted in the perspective of the underrepresented.

His short hybrid doc, JOE BUFFALO, is about an Indigenous skateboarding legend and survivor of Canada’s notorious Indian Residential School system. It was executive produced by Tony Hawk, won the Audience Award at SXSW, and was widely considered a contender for the 94th Academy Awards. His most recent short, THE RUNNER, is about an Indigenous 20-year-old who ran a 100-mile ultramarathon for mental health in his community. It was acquired by The New Yorker and featured by Short of the Week.

Amar resides with his wife and daughter on unceded Musqueam, Squamish, and Tsleil-Waututh territory in Vancouver, BC.

'Joe Buffalo' by filmmaker Amar Chebib brings to mind the powerful storytelling of Jacob Rosenberg's 'Waiting for Lightning', which culminates in Danny Way's feat of jumping the Great Wall of China, as well as Matthew J. Powers' inspirational 'Never Been Done' about Jon Comer—the world's first pro skater who lived with a prosthetic leg. It's told from a first-person perspective with Buffalo narrating his own story. And what a story it is. Buffalo became a professional skateboarder in 2019, and was the first Indian Residential School survivor to do so. While generally the arc of a pro's career starts when they're in their early 20s and ends when they're in their early 40s, Buffalo's begins at the age of 41. His statement, “skateboarding was definitely a saviour,” is a theme throughout the film, which ends on an incredibly hopeful note after revealing its character's struggles with intergenerational trauma, and his ultimate triumph in becoming a powerful role model and an inspiration for others. Director Chebib is no stranger to working with subjects with trauma, and helping to carefully tell their stories. His work with Syrian refugees on his feature documentary 'Wajd' informs an approach he describes as allowing subjects to have "a hand in telling their own stories as a means of decolonization, healing, and empowerment." The cinematography is by Liam Mitchell, a friend of the subject's for over two decades. Their familiarity comes across on the screen, as Buffalo is just as comfortable doing a backside lipslide on a handrail as he is speaking about his path in life. The soundtrack and overall sound design is the work of Matt Drake and paid intern Kaitlyn Redcrow. Their craftwork elevates the production to the next level, delivering the last blow in a one-two-three punch of great direction, visuals, and sound. And, of course, an incredible story.

A short documentary is highlighting the life of a professional skateboarder originally from Samson Cree Nation in Maskwacis south of Edmonton. Joe Buffalo has gone through many trials and tribulations to get to where he is now. His journey is chronicled in the new film Joe Buffalo. "I was raised traditionally through ceremony and speaking my language but when I was 11 years old I was taken off reserve and forced into residential school," Buffalo explains in the film's trailer. "Who are you supposed to run to? When you say, 'Mom? Dad?' Who's going to come and protect you from these people?" Skateboards and Indigenous culture: How a local teacher combined both and won an award Canadian skateboarders gear up for first ever Olympics Filmmaker Amar Chebib is behind the documentary. He met Buffalo in Montreal in the summer of 2005. "Hanging out at this place called Peace Park where everyone rolled through. Got chased away by the cops and came back and skated more," laughed Chebib. "I think 2019 was when I heard about Joe turning professional and I was like, 'Whoa! I remember that guy.'" Buffalo describes skateboarding as a tool that has helped him navigate through life. "Skateboarding on its own is powerful enough," he told CTV News Edmonton. "But I wasn’t always focused on it. There were times when there were a lot of distractions." Working through his traumatic childhood and overcoming decades of addiction among his biggest hurdles. "Just because the system has programmed me to self-terminate doesn’t mean I have to go that route," said Buffalo. "I was sort of blown away by just by how much he has had to overcome to get where he is," said Chebib. Chebib hopes because his film is also about skateboarding, it will appeal to a demographic that may not normally watch a documentary on residential schools. "Many people are familiar with that legacy but they didn’t know that the last school didn’t close until the nineties," he said. The film had its world premiere at the Big Sky Documentary Film Festival in February and recently won an audience award at SXSW. 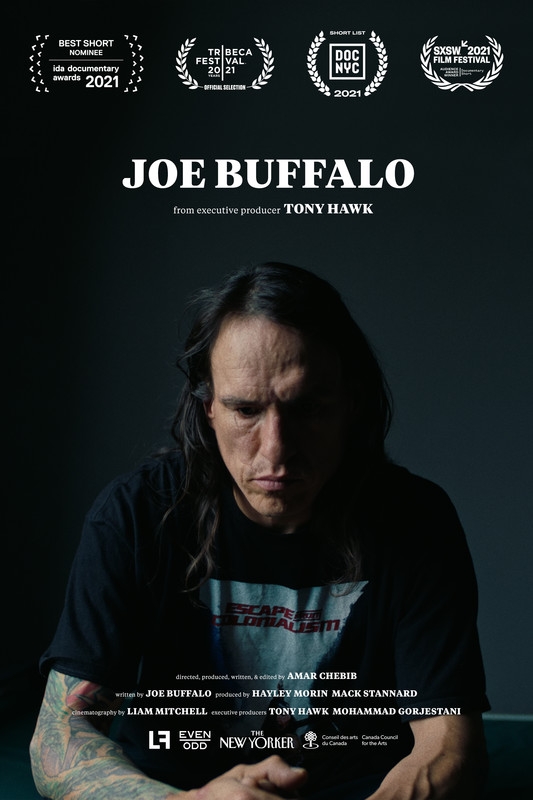