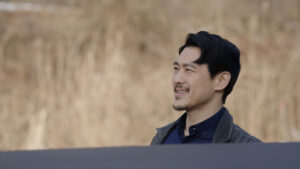 A conflicted American-Born-Chinese waitress meets a mysterious man and is drawn into an unimaginable circumstance.

Eddie Shieh 謝宗楷 (pronounced ‘Sh’+’yeah’) is a Twindad by Day and Filmmaker at Night. His fraternal twin boys were born in 2017. Eddie directed the semi-finalist play “That Kid” written by Jane Willis for the 2016 Samuel French OOB Short Play Festival. His screenplay “La Grippe” shortlisted at the first European Sundance Screenwriting Lab, Italy in 2015. He was a finalist nominee to the 2014 Fox Global Directors Initiative fellowship and a Grand Prix Finalist with his short film “Tu e Eu” at the 2011 Academy Qualifier Short Shorts Film Festival & Asia in Tokyo, Japan. On occasion, he predicts weather with his surgically repaired joints (no app yet).

NEUL未知ND is a concept trailer coincidentally created for three different initiatives. The story is based on my dramatic thriller in development that begins with a scene prompt writing assignment from a graduate film application, shaped under the theme, “undiscovered territories” or “neuland” for the 36th KurzFilm Festival Hamburg Three Minute Quickie Competition. Once committed to challenge, producing and securing locations within a few weeks of the competition deadline in the midst of winter was rather stressful. Editing under the three-minute requirement was even tougher. But with a talented cast and crew and a super-star post team altered what began as my unknown into a powerful proof-of-concept that we hope audiences become excited about.