In the near future, technology firm Red-Eye is on the verge of developing a revolutionary contact lens that records human sight to replicate memories. The device uses an artificially engineered intelligence known as U.R.M.

When the company’s lead researcher is strangely murdered at the time of the technology’s release, Thomas Elliot (Greg Bryk), an old-fashioned police detective investigates with intrepid researcher Margo Elson (Tommie Amber Pirie) who are drawn into searching deeper to apprehend the illusive digital shapeshifter.

Both soon are terrifyingly threatened by memories of their past the deeper they continue to seek in uncovering what this dangerous artificial intelligence is trying to consume. 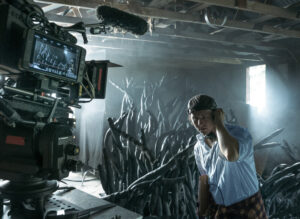 Benjamin Ross Hayden is an Indigenous (Metis) film director from Western Canada. The youngest filmmaker in Canada accepted to the Telefilm Canada micro program in the roles of director, writer, and producer whose films have premiered at over 60 international film festivals worldwide.

In the past two years, Hayden has directed and written two feature films within one year. Hayden is currently in postproduction from directing and producing his third theatrical feature, “The First Encounter” with a theatrical guarantee in Landmark Cinemas across Canada.

Hayden’s storytelling is visual and character-driven, exploring social and political topics from the Métis perspective with a high concept scope and distinct style. Vice Magazine lauded his first feature, The Northlander, as “One of Indigenous Cinema’s Most Important Films.”

The Northlander (2016) has sold to over thirty territories and premiered at fifteen international film festivals including ImagiNATIVE Film Festival, and Montreal World Film Festival, with numerous broadcasts on APTN.

Parallel Minds is an indigenous futurist tale. The origin of the story began with a calling to be a near-to-present tale asking the ethical question about the technologies that society today are all-to-ready to adopt. As we move forward into the future, what of our spirit and humanity is given away?

While researching, the present world is my inspiration for Parallel Minds in observing how interaction has changed as decades move forward. Normal social interaction is now adjusted by populations of self-assembled demographics, promenading artificial lifestyle and staging happiness. These are constructed feel-good narratives of fictional lives on display. The smartphone generation created this from “life competition”. Competing for a title of ground in the digitally constructed world is the new form of social colonialism. New colonial pioneers are the tech start-ups on the bleeding edge of new machinery. A race to usher what a technology can change about the world has happened ceaselessly since the industrial revolution. What is happening next is how technology will change us, on the most personal level. The journey ahead of what that change is in the decade to come is the journey of Parallel Minds.

In 2027 is the birth of Red-Eye, an optic contact lens with a power to record what the eye can see. Red-Eye has a nanotechnology sophisticated enough to recreate memories as though they were truly happening again. Red-Eye soon becomes twisted into a perverse and invasive nightmare when the code develops a threatening issue. This initiates an odyssey for one of the makers to investigate. Margo Elson is the skillful Métis tech developer with a natural gift of understanding human memory. She helped create code to make Red-Eye function. Memory is important to Margo by virtue of her guardian, Kookum, who nurtured Margo’s spiritual understanding of truth from a young age. Kookum’s spirit returns to help Margo often, and her life is a legacy affecting the generation that follows it.

The parallel of spiritual premonition of the sacred clairvoyant versus “virtual vision” is a theme in Parallel Minds. There is a spiritual theme in how the rebellion of an earlier generation in the residential school system is a parallel to rebelling against a technology of control in the future. Kookum readies the next generation with traditional knowledge to combat this control system. When the world is following a course of technological determinism, Kookum’s children are prepared to fight for freedom.

Memories become manipulated by a disturbing force inside the Red-Eye code. Margo must follow in the footsteps of her fallen contemporary at Red-Eye who dies by the hand of a mysterious apparition. Margo discovers it is the same killer of Kookum, and has returned from her past to slay again. She must navigate for herself this psychological manifestation in a frightening maze of memory and technology before the rest of the world using Red-Eye is exposed to the same.

Returning with a cerebral technological visual style using my first film Agophobia to explore hyper-digital futurism, and so real the visions of Parallel Minds look (and are) in fact completely real to the eye. Once again, exploring strongly visual characters as in The Northlander by drawing artistic inspiration from vast landscapes and architecture is a part of this story. Parallel Minds is a glimpse into a cerebral and visceral 2027, a world where technology can record what the eye can see – and the last remaining frontier for freedom is the mind. 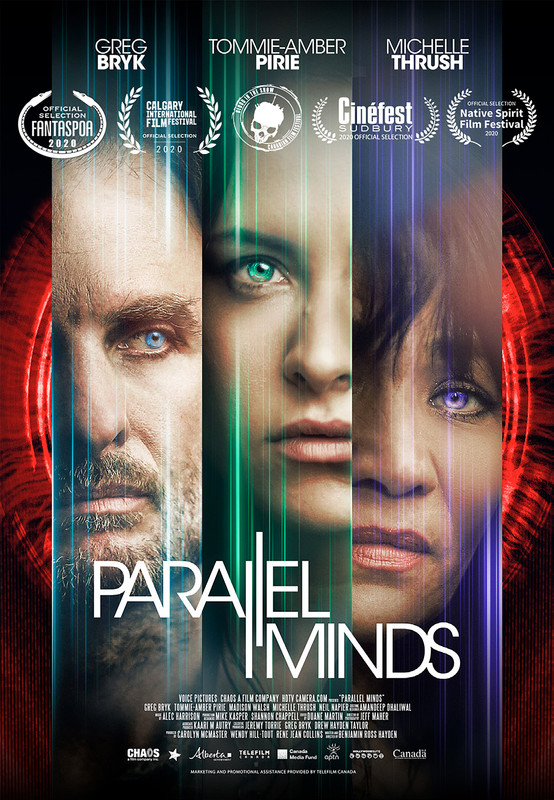