During the emotional rollercoaster of January 6th, 2021, our nation laid siege on itself as radical right wingers stormed the capitol in a disgusting display of violence, intolerance, hatred, and hypocrisy. Rather than acknowledge the immense double standards, where were the rioters people of color, they’d have been met with gunfire and violence, the terrorists used their white privilege to wreak havoc, replaying and repeating the same racism that’s been seen throughout history. Meanwhile during that very day, Georgia took a miraculous step towards equality as the state turned blue. This civil rights piece juxtaposes the glimmer of hope displayed in Georgie with the ever repetitive racism and violence engrained in this country throughout history and the present.

This piece was created to bring awareness and possible profit to the Albuquerque Center for Peace and Justice and to Stacey Abram’s Fair Fight action in order to help fight voter suppression. 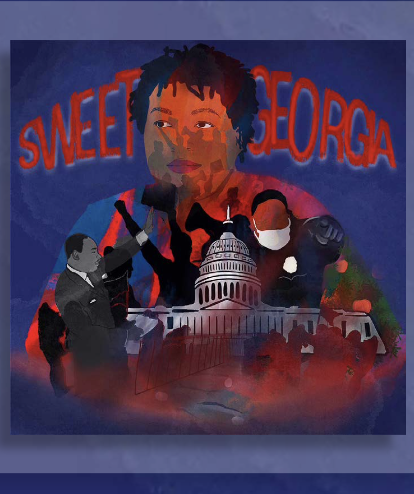