Set in a small Calabrian seaside town, this extraordinary directorial debut chronicles 13-year old Marta’s private duel with the Church as she wrestles with puberty and her personal coming of age.

The subtle, affecting “Corpo Celeste” is the story of Marta (Yle Vianello), a 13-year-old Italian girl who has spent the last decade growing up in Switzerland. She returns to Calabria (an act that’s described in the press materials as a “return emigration”), in southern Italy, to be bombarded with family and thrust into the rites of Catholic confirmation. She doesn’t stumble across a conspiracy or gain a magic key that transports her to another dimension but you hang on her every move, action, and glance, just the same.

There isn’t a whole lot that happens in “Corpo Celeste,” at least from a plot standpoint, but that’s okay. It’s captivating just the same, emphasizing personal and spiritual growth over large, weighty narrative beats. And it would be a shame, in a festival that includes new films by the likes of Pedro Almodovar and Roman Polanski (as well as a movie with Magneto‘s wiener), if this film, with its quiet simplicity, were overlooked by critics and festival visitors.

As the movie starts out, a grand religious celebration is taking place, which allows Marta to mingle with relatives and gives us a chance to first glimpse Don Mario (Salvatore Cantaloupo), who runs the church where Marta is taking her confirmation classes (a spiritual must for maturity and development, and essential if you ever want to get married). As Marta goes out to explore her surroundings, sometimes in an attempt to get away from her pushy teenage sister, so do we, with the camera gliding over half-finished apartment buildings, people picking through clumps of garbage for salvageable materials, and vast, pollution-choked highways. She doesn’t know what to make of her new home, but the sensation is overwhelming.

We see Marta poke around town, steal a bra from her older sister to try on, and suffer through the confirmation classes, with their antiquated gender politics and spiritual lessons. Some of these scenes, like a early sequence where Marta presents a cake at a birthday party that looks barely edible, creak with a kind of squirmy awkwardness, but they never devolve into Todd Solondz-style archness. You feel for Martha the entire time, a mixture of nervousness and protectiveness, in these scenes even more so. The entire time you’re waiting for something unbelievably awful to happen to this young girl, not out of the need for some cheap thrill, but because her surroundings seem to dwarf her so severely. Thankfully, nothing truly terrible happens to young Martha, and like everything else in the movie, the minor thrills are subdued and easy to overlook. About halfway through the film we realize that the priest is just as adrift as she is, with ceaseless campaigning for an unspecified political end, and towards the end of the film she joins him on a journey to an abandoned village to retrieve a crucifix. The crucifix is to feature heavily in the confirmation ceremony, and the images of the two people, both in search of something heavenly, in this ghostly setting, is powerful, unforgettable stuff.

Not that “Corpo Celeste” is all dour and soul-searching, as there are moments of humor sprinkled throughout (including what ends up happening to that crucifix, as well as an expertly placed gag about a neon cross that garishly hangs in the church). It’s a testament to first time writer/director Alice Rohrwacher’s humanistic eye, which is unadorned but nevertheless totally beautiful – the sun draped landscapes and unblinking attention to half-formed urban sprawl have their own unique gorgeousness. But nothing feels affected or forced. It feels real without being kinetically “real” – the camera doesn’t jitter and jump with every step and it doesn’t wallow in unpleasant detail (a moment when Marta gets her first period is a great example, restrained but no less forceful). The film is a tiny slice of a very young life, but we get to experience it fully and without pretense. … it’s one that should not be missed. [A] 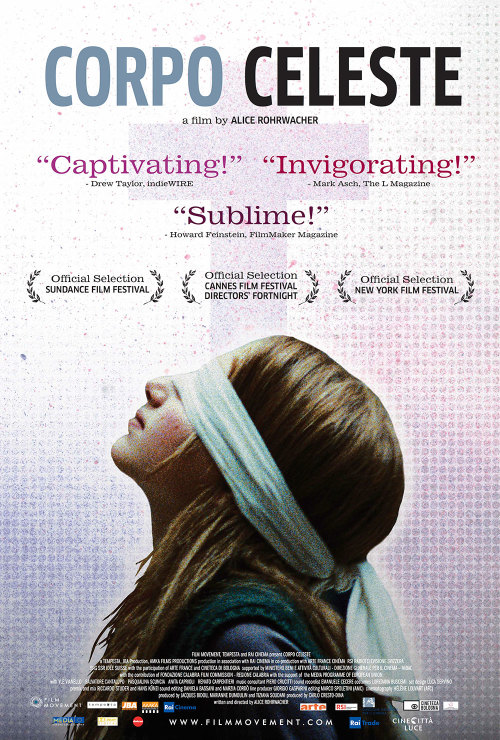