This Dickensian documentary portrait of corruption, political scandal, and exploitation follows Budhia, a four-year-old boy rescued from the desolate slums of India and groomed by his surrogate father to become a national hero as a long distance runner.

Ripe for a fiction remake, “Marathon Boy” is the fantastical yet factual story of foul-mouthed Indian slum child-turned-marathon runner Budhia Singh. A tale that would have been a sordid curiosity in lesser hands than those of helmer Gemma Atwal, the docu transcends its tabloid origins to become something epic, artistic and even archetypal. HBO, in its not uncustomary wisdom, has secured broadcast rights, but the pic’s cinematic virtues deserve a bigscreen, and its true-crime qualities could fill arthouse seats.

That Atwal tells the story in real time, with extraordinary access to all the principals, simply makes a good story better. Singh, 3 years old when his slum-dwelling mother sells him to an abusive peddler, is rescued by judo instructor Biranchi Das and brought to live at Das’ self-styled sports center and orphanage, Judo House. There, with his wife, Gita, and their loose family of salvaged children and athletes, Das trains India’s better judo competitors, scrambling to support his ever-expanding number of dependents.

As Singh himself explains, he was once ordered by Das to run as punishment for his filthy language. He started at 6 a.m., and when Das returned home at 1 p.m., Singh was still running. Knowing he had some kind of prodigy on his hands, Das began training the boy, and before Singh was 5, he had run 48 full marathons and become the toast of Orissa, the state whose authority would eventually come down on both their heads.

Is Das only in it for the money? One of the film’s central questions is: what money? Although Singh is fast becoming a sensation, Das’ profit motive is hard to locate; he seems to be in it for the glory that would come to both him and India, should he actually cultivate an Olympic marathon runner. The attention he and Singh attract includes that of child welfare officials in Orissa, who can’t quite put their finger on what Das is doing wrong but accuse him of exploitation. Das reacts with vitriol, questioning their authority and defying their orders; Singh is banned from running, spurring Das to look for loopholes. Hostilities escalate, and the entire nation becomes engrossed in the adventures of the short long-distance runner.

With no narration and very few subtitles, Atwal lets the story mostly tell itself; the several animated sequences, done in Raj-era shadow-puppet style, are a charming adornment. With a few exceptions, the helmer also sticks to her own footage. The fact that she was in on the story so early not only gives the docu a sense of immediacy and drama, but also the proper journalistic bonafides: Singh’s biological mother, who will later accuse Das of all manner of crimes against her son, testifies to the judo instructor’s virtues and goodness early in the film — something that will come back to indict her later, at least in the minds of viewers.

Atwal and her d.p./co-producer, Matt Norman, seem to get to everyone, from child-welfare bureaucrat R.S. Mishra (who seems far less outraged about Singh’s well-being than about Das’ defiance) to the slum cronies of Singh’s mother. Singh himself seems like a trainwreck: While Das’ motives may not be malicious, he’s a gifted hustler of the media, and the boy is obviously parroting his trainer’s words when he’s being interviewed. This is nothing, however, compared to what others coerce Singh into saying, as “Marathon Boy” moves away from the worlds of sports and petty politics and crosses the line into top-level corruption, assassination and grief.

Production values are tops, including some glorious visuals by Norman. -Iohn Anderson Variety 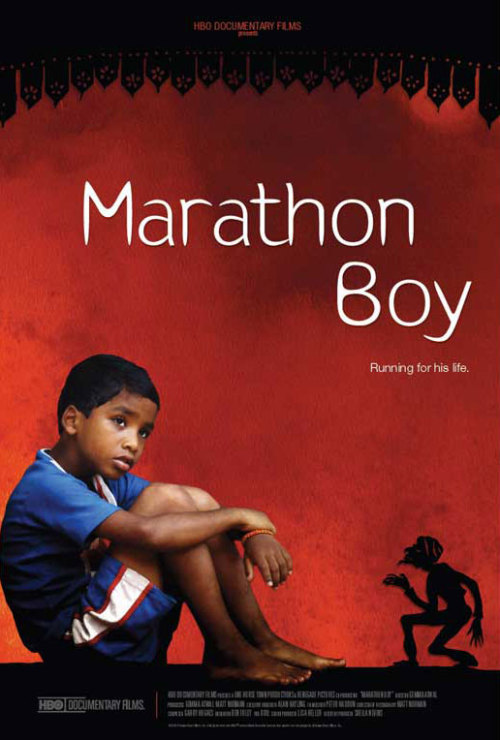