Blending the sometimes complex relationships between teachers and students in a delicate character study- the screenplay was expanded from a one-character play by Evelyne de la Cheneliere- reveals an almost fable-like tale of loss and light seen through the globalized lens of contemporary Montreal school culture.

The film opens on a tragic event involving the suicide of a well-liked elementary school teacher whose body is later discovered in her classroom by two of her students.  The story of recovery though is seen mainly through the perspective of Bachir Lazhar, played with delighted nuance by Monhamned Fellag who steps in as the emergency replacement tasked with the goal of bringing this shellshocked group of students back to a modicum of normalcy and recovery.  The story’s main arc reveals the interwoven fabric within Lazhar’s own complicated backstory as a middle-aged Algerian immigrant seeking political refuge within Quebec with the recovery of two students (played exquisitely by Émilien Neron and Sophie Nélisse) who shared the unfathomable misfortune of being on the frontline of their teacher’s suicide.

The screenplay and the actors who inhabit its school’s walls allow the viewer to witness and slowly process the fact that there are various voices that are trying to speak to the meaning of the crisis.  Why did Martine Lachance kill herself, and why in her classroom?  When does the act of suicide also become an act of emotional violence?  These are just a few of the questions the film has at its centre- and everyone it seems, from the parents, to  teachers, administators , and support staff have different “solutions” and methods for being able to understand the meaning of the event and how to move on from the crisis.

Despite presenting both heavy, and heady character material and situations, Monsieur Lazhar often reveals touching moments of light comedy as we are introduced to the other students and the wealth of diversity they bring to the texture of the day-to-day happenings within the classroom.  Yes, school is a place of work and routine, but also of communication and a home away from home.  Lazhar’s pedagogy initially demonstrates a more formalistic approach to the curriculum, i.e. having his fifth grade students taking dictation from Balzac as a first lesson helps provide sharp bits of humour for the audience.  But gently, as Lazhar’s own personal destiny begins to change by making ammends with his own past in war-torn Algeria and discovering depth within his own adult relationships (including demure yet fun dalliances with a  fellow teacher played by Brigitte Poupart) shards of light begin to penetrate the lives and aspirations of his students.  The alchemy of how that all comes together in the narrative economy, the naturalism of the child actors and the sometimes staunch but always human portrayal of Bachir Lazhar on screen may not help to bring any immediate solutions but brings quiet moments of grace that sustain. -Gregory Ashman 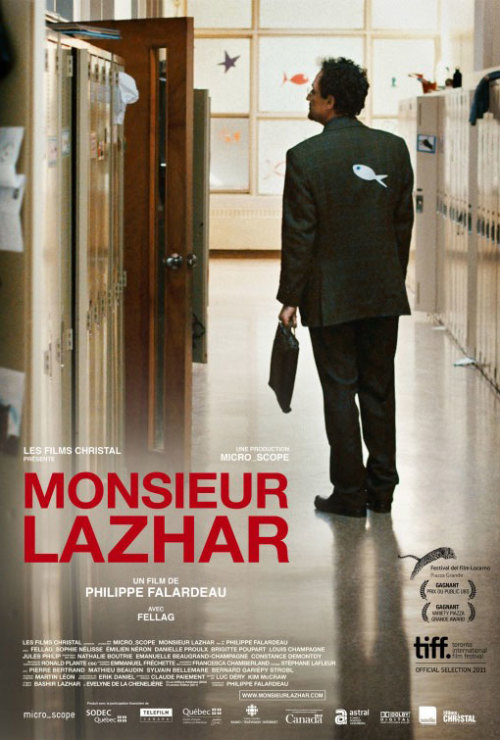