Last year, Japan’s wild man, Takashi Miike, made the majestically posh samurai movie, 13 Assassins, which went on to win several prestigious awards. This year, his stately, well-appointed samurai movie, Hara-Kiri: Death of a Samurai was an official selection of the Cannes Film Festival. That’s all very nice, but we’ve got the best new movie from him since Yatterman and it’s got all the crazy Miike left out of his other two films, and then some. Ladies and gentlemen, welcome to another totally messed up kids’s film from Takashi Miike, a demolition derby of good taste….NINJA KIDS!!!

Exchanging noble samurai for kid ninjas has let Miike get back in touch with his wild side. This big budget, big screen version of popular Japanese kid’s show Rantaro the Ninja Boy (running for 1,437 episodes and counting!) this is like Harry Potter if Harry Potter was a ninja who hid underground and killed people with bamboo darts and ninja bombs.

Young Rantaro is from a family of low class ninjas and he’s sent off to first grade at Ninja School by his parents who hope that one day he’ll grow up to be a respectable middle class ninja. But he’s hardly at school for five minutes when a classmate – literally – has the snot beaten out of him, the headmaster starts exploding and more wild and wooly ninja tricks than you can hit with a throwing star are zipping off the screen.

With the strangest, most deadpan sense of humor of any movie all year, this is a big budget kids film in the vein of Miike’s The Great Yokai War, possessing the same sense of fantastical freakery and goopy monster-based humanity except this time the monsters are wild, mutated, freaked-out ninjas with enormous, super-deformo skulls. With a subplot involving gangster hairdressers, constant interruptions form Mr. Konnamon, your friendly ninja trivia commentator, characters who can’t stop talking to the camera, and an ode on the favorite foods of the ninja, this is a high pressure blast of everything weird about Takashi Miike that we’ve all been missing from his new, mainstream, “respectable” motion pictures. Long live the ninja!!! -New York Asian Film Festival 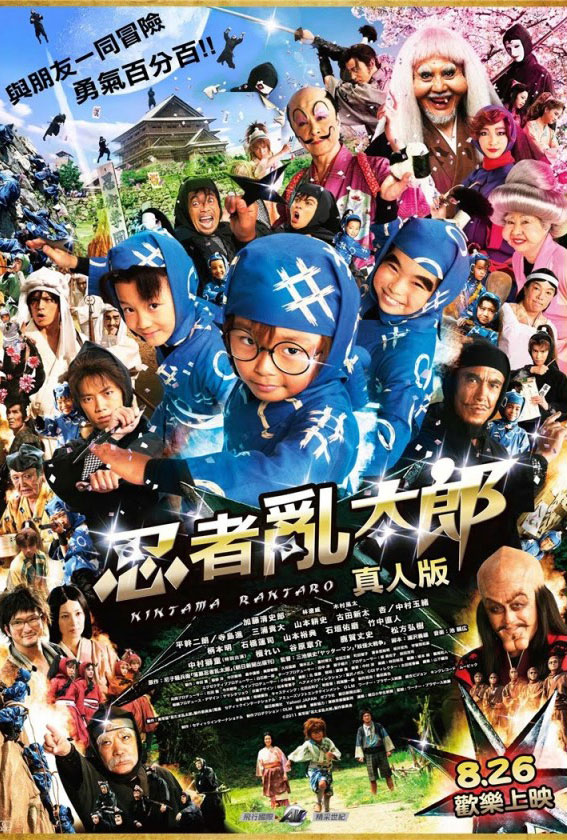