As Hollywood welcomes the emergence of talkies, a silent movie star faces the twilight of his career and the dawn of a new romance. Starring Jean Dujardin (Best Actor at Cannes), Berenice Bejo and featuring John Goodman, this audience favorite is bound for Oscar favor.

An honest-to-goodness black-and-white silent picture made by modern French filmmakers in Hollywood, USA, The Artist is a spirited, hilarious and moving delight. A sensation in Cannes, Michel Hazanavicius’ playful love letter to the movies’ early days spins on a variation on an A Star Is Born-like relationship between a dashing Douglas Fairbanks-style star (Jean Dujardin, who won the best actor prize in Cannes) whose career wanes with the coming of sound and a dazzling young actress (Berenice Bejo) whose popularity skyrockets at the same time. Meticulously made in the 1.33 aspect ratio with intertitles and a superb score, The Artist has great fun with silent film conventions just as it rigorously adheres to them, turning its abundant love for the look and ethos of the 1920s into a treat that will be warmly embraced by movie lovers of every persuasion. With James Cromwell, Penelope Ann Miller and John Goodman as a definitive cigar-chomping studio boss. A Weinstein Company release. (New York Film Festival)

“Silent films succeed by their ability to tell a story with pictures alone. Hazanavicius starts with a solid script—impeccably structured and ingeniously crafted—that turns the manner in which he tells the story into a dimension of the story itself.  It soaks effortlessly into the imagination this way.” Read more… 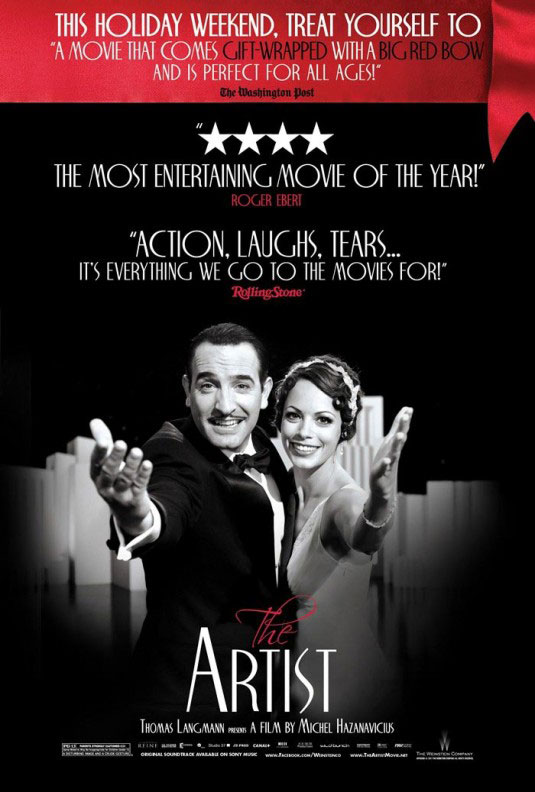 Print courtesy of THE WEINSTEIN COMPANY