Tough, but diva fabulous, Leo, an aspiring drag superstar, is stuck working in a fish cannery in Alaska. He and his twin sister are trapped in the monotony of fist fights and fish guts. Out of necessity, Leo learned to fight back, which catches the attention of the local boxing coach. When a new boy moves to town and wants to be his sparring partner, Leo has to face the real reason he’s stuck in Alaska. Features Margaret Cho. In person: Director Shaz Bennett

In a blue-collar town somewhere under the Northern Lights, a gay black teen dreams of becoming a superstar diva, although for now he’s stuck working in a cannery full of fish guts and homophobia. But Leo and his feisty twin sister Tristen, who’s being treated for Hodgkin’s, are nothing if not survivors. They endured difficult childhood with quarrelsome parents; a decade later, they’re self-sufficient but rebellious young adults with a deadbeat dad. In this tough environment, Leo has learned how to defend himself, adapting his dance floor moves to adept self-defense. Performing together at the sole local gay bar is their only outlet. Still, Leo’s life is not super fabulous until his boss introduces him to local competitive boxing…and it helps that Declan, the cute new guy in town has volunteered to be his sparring partner. Perfectly cast drama, top-lining a most capable Martin L. Washington Jr. In his feature debut, with Maya Washington (unrelated) credible as his sis, dark and broody Matt Dallas as the guy, plus Jason Scott Lee and Margaret Cho providing meaty support. Writer-director Shaz Bennett, in her directorial debut, has made a compassionate and engaging jewel of a movie, but despite its many-faceted charms, it’s a film that adamantly refuses to pull its emotional punches. –by 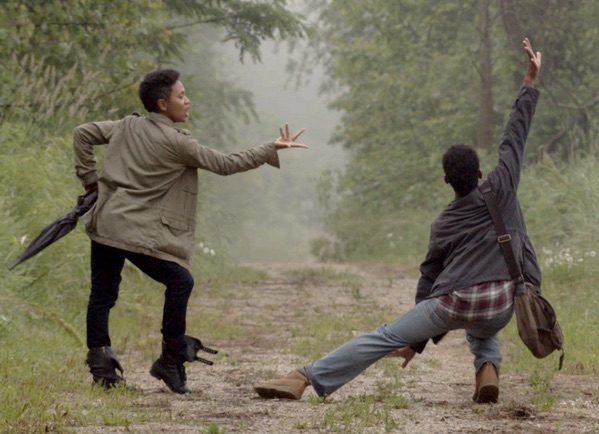