In 2017, 10-year-old Ia Yang found a small American bomb on the roadside in Laos. She thought it was a ball, but when she threw it, it exploded, killing her instantly and injuring 12 others. Half a century after the US waged history’s largest bombing campaign, an estimated 80 million unexploded bombs remain in the Laotian soil today. Old American bombs have killed and injured more than 20,000 civilians since the end of war. Laotians work daily to clear the land, but it’s a painstakingly slow process that desperately needs more money. The US spent $50 billion to bomb the country more than 40 years ago, yet it has spent only $300 million to clean it up in the decades since. Only one American—a retired school principal from Wisconsin named Jim Harris—works on the ground in Laos to remove old bombs. Through the intersecting stories of Laotian families, clearance workers, government authorities, and Harris’ team, Eternal Harvest traces the failures of US foreign policy to clean up America’s postwar mess in Laos, and it underscores the urgent need for more funding.

Jerry Redfern is an award-winning visual and print journalist, covering environment and humanitarian issues globally. At home in New Mexico, he reports on oil and gas for Capital & Main. His film and photo work ranges from the aftermath of American bombs in Laos to agroforestry in Belize to life amid logging in Borneo. Jerry’s work has appeared in The New York Times, Wall Street Journal, Forbes, and Der Spiegel, among others. He has contributed to four book projects, including Eternal Harvest: The Legacy of American Bombs in Laos (co-authored with Karen Coates), which was a finalist for the IRE Book Award and the basis for Eternal Harvest the film. Jerry was a Ted Scripps Fellow in Environmental Journalism at the University of Colorado, and a Senior Fellow at the Schuster Institute for Investigative Journalism at Brandeis University. When not working with cameras and words, he crashes bikes and grows grapes.

Karen Coates is an independent producer, editor, author, and investigative reporter who covers food, environment, health, and human rights globally. She is a fellow with the International Women’s Media Foundation, a contributing editor for Archaeology Magazine, a former Ted Scripps Fellow in Environmental Journalism at the University of Colorado, and a former Senior Fellow at the Schuster Institute for Investigative Journalism at Brandeis. She is the author of four books, including (with Jerry Redfern) Eternal Harvest: The Legacy of American Bombs in Laos, which was a finalist for the IRE Book Award and the basis for Eternal Harvest the film. She also conducts international journalism training, and, as a food writer and former correspondent for Gourmet, has a passion for spicy curries. 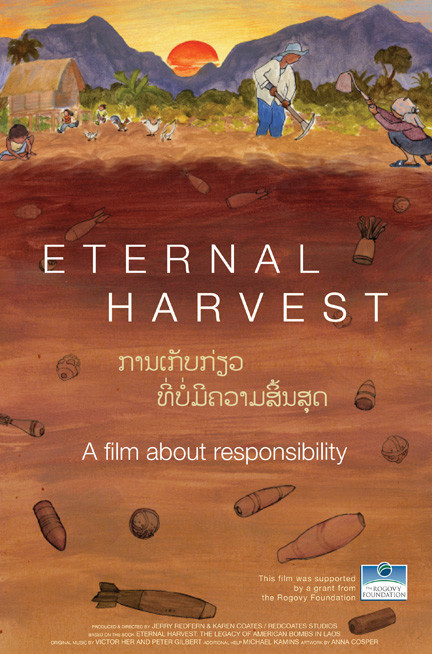