“One Word Sawalmem is a film of great power and purpose. It explains the Indigenous understanding and knowledge of the interdependence amongst all life on this planet.” — Dr. Stephanie Pratt, Dakota and Anglo-American art historian and cultural consultant, Native Spirit Film Festival

In his uplifting and internationally-acclaimed short film One Word Sawalmem, co-director Michael “Pom” Preston of the Winnemem Wintu tribe of Mt. Shasta, gives us a rare look into the life of local Native wisdom keepers – people who hold humanity’s most intimate knowledge about how to live in balance with the Earth and how to thrive with the natural world.

The film invites us to consider how the healing of the planet could be facilitated by shifting our relationship with the Earth – from the current mainstream economic one based in exploitation and domination, to the type of relationship that human beings have held dear for tens of thousands of years – a sacred one that is based in respect and reciprocity.

Finalist of the short film program of the Tribeca Film Institute, and a selection for 25+ festivals, One World Sawalmem is born from one question: what is one word from your ancestral language which changed your life and which you can offer to humanity to heal our relationship with the Earth?

Sawalmem could help us unravel the climate crisis we’ve created…

For Winnemem Wintu young man Michael “Pom” Preston Sawalmem represents an entire worldview, a vital vision for healing the world and for healing from the legacy of the Shasta Dam that, since the 1940s, has harmed salmon and the Sacramento River and the Winnemem Wintu people of Shasta Mountain, California.

As a student of environmental studies at UC Berkeley, Pom did not feel heard. He felt he was being told that his indigenous viewpoint was irrelevant.

The time has come to listen to Pom and to the Winnemem Wintu tribe.

In violation of state law, against all scientific reason and risking contamination of Northern California’s water supply as well as “ethnocide” against the Winnemem Wintu people, a Shasta Dam raise is being fast-tracked by the Trump administration, U.S. Bureau of Reclamation, and Westlands Water District.

Pom dances in tribal ceremonies on Mount Shasta to stay strong in this latest battle as a warrior for Sawalmem.

A vision of the return of the salmon to their ancestral home waters and the restoration of the largest river in California, the Sacramento.

The spiritual is political.

MICHAEL “POM” PRESTON is a member of the Winnemem Wintu tribe and the son of the current tribal chief, Caleen Sisk. He grew up going to his tribe’s sacred places and has been dancing in the Winnemem way since he was four years old. He continues to protect sacred sites along the McCloud River, which have been under threat of inundation from the Shasta Dam raise effort by the US Bureau of Reclamation. He is a participant in the Run4Salmon, a 300-mile prayer run from the San Francisco Bay to the headwaters of the McCloud River. Runners make prayers at specific points along the waterways for the return of the Chinook salmon and the health of the water and lands.

[Confirmation, as requested by some festivals.] Throughout the production of the film, Pom held full authorship and creative control of the film with his co-director, Natasha.

NATASHA DEGANELLO GIRAUDIE is a mother, a filmmaker and a teacher of nature practice. She helped to pioneer the micro-documentary genre for humanitarian movements, filming in more than 30 countries and reaching expansive audiences with her work. Her film, One Word Sawalmem, was selected by Robert Redford and the Redford Center as a powerful voice at the intersection of youth, indigenous wisdom and environmental change. Her experiential nature meditation film, Inmanencia, was selected to be screened in festivals around the world from Boulder to Buenos Aires to Bhutan, where it won the Audience Choice Award.

As a child, Natasha learned some of her most valuable lessons outside the classroom – from indigenous people living deep in the wilderness of her native Venezuela. As an adult, she studied nature-inspired compassion with the Dalai Lama for more than 20 years. She also attended nature-based retreats with Thich Naht Han in his monastery. As a teacher of nature-based wellbeing, Natasha has taught groups of young professionals from the United Nations, Google and Airbnb as well as medical practitioners, politicians, nonprofit leaders and fellow documentary filmmakers in the US, Latin America and Asia.

POM’S STATEMENT: Sawalmem, “sacred water,” is how the Winnemem Wintu tribe has always been in relationship with water. Coming from Northern California, where water is abundant, the tribe decided it was time to share this meaning of Sawalmem to help change the concept of water as “resource” to water as sacred life giver. As a member of the tribe, I decided to do my part in telling the world what my tribe is saying about water and became part of making this documentary happen.

NATASHA’S STATEMENT: The path for a non-native filmmaker wanting to share indigenous stories is a delicate one. It requires extra layers of relationship building, trust, access, patience, humility, alignment and collaboration. But this story is deeply personal for me and is worth all that, and more.

My friendship with Pom, the co-director of this film, and his tribe has evolved naturally and it has been their openness, their trust and their invitation to bring the camera into their most intimate circles which ultimately has enabled us to move forward on this project.

As a child growing up in Caracas, my parents often took me into the wilderness of Venezuela to meet native tribes who lived on their ancestral lands. For me, those trips were like visiting islands of sanity where people seemed to speak the language of my heart. They invited me to drink from their pristine rivers and to give thanks for the joy and privilege of doing so. That water quenched me deeply and started to heal the wound of living in a city which treated its river as a dump.

Today I am the mother of a Californian girl, who at the age of 12, is participating in the climate strikes, has woken up at 4am to join the crew as production assistant for our first One Word film and has lived in community with the Winnemem Wintu tribe on their Run4Salmon journey. She has grown up at the mouth of the Golden Gate, right on the path of the salmon from Pom’s ancestral land.

In short, that I would come to make these films is natural, and in some ways inevitable.

This is a about the Winnemen Wintu tribe in Northern California. Using magnificent photography it describes how this tribe relies on salmon fishing which is a strong part of their economy as well as their belief that water is a sacred and precious commodity. This film has been shown at many festivals including Tribeca Film Festival, Prague International Film Festival and the Maui Film Festival. 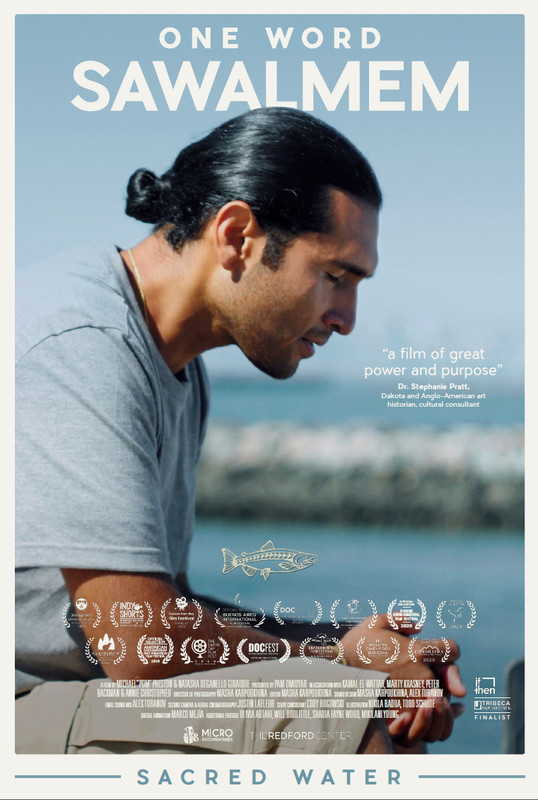